“It’s summertime and the livin’ is easy…”

To me, it doesn’t matter if it’s Billie Holiday, Billy Stewart or The Zombies singing those lyrics.

The Gershwin aria from Porgy and Bess is one of my all-time favorite songs. And the number of covers performed over the past eight decades demonstrates the timelessness of the piece.

But, for me, summertime is more than just a song. It’s also an important stretch for my investing and trading strategies.

It’s when gasoline prices surge… it’s a key period for a variety of crops… and it’s even proving to be vital in one of the world’s nascent but booming sectors.

The legal recreational pot industry is still quite young – only a few years old in the U.S.

But the data that’s available is laying out a profitable trend… which, for me, a trend trader, is very exciting.

The most recent data from the Colorado Department of Revenue showed that, once again, recreational marijuana sales hit an early year record in March of $105 million. Not only was March the biggest month for sales this year, but it was the biggest monthly total since legalization in the Centennial State.

But, more importantly, we have a pattern solidifying… 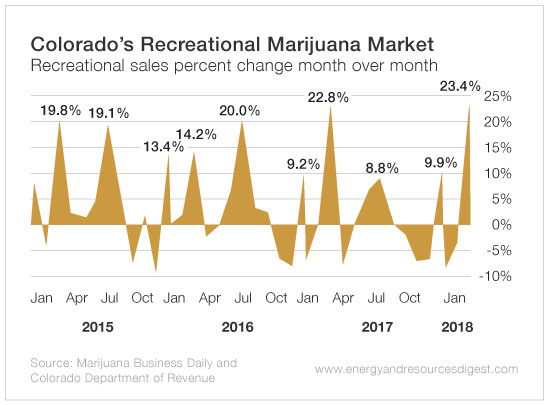 Sales are spiking higher in Colorado in March every year.

And this is what the data tells us so far…

January and February have been sleepy months for adult-use. And October and November have been sluggish as well.

Meanwhile, adult-use sales spark to life in March and blaze to new highs in the summer months, up to August or September.

So we have several months where cannabis sales are robust.

When we look at Denver, the state’s most populous city, this trend is largely mirrored.

Denver is home to roughly 12.5% of Colorado’s total population. And it represents a considerable chunk of the state’s recreational cannabis sales.

And if we look at the total adult-use cannabis sales in each month from 2014 to 2017, the softer times of the year are more visible… 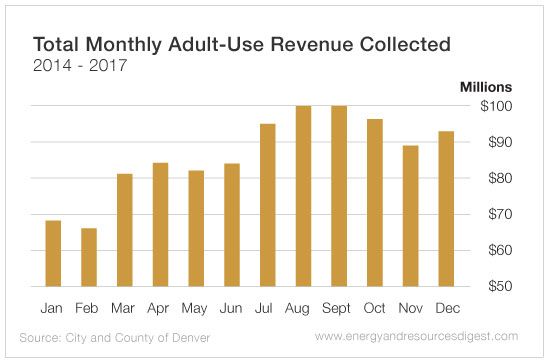 This chart shows the combined gross cannabis sales from 2014 to 2017. For example, total January sales during that four-year stretch were $68 million. Meanwhile, in August and September, total adult-use sales were $100 million each.

What we see is that January and February are the slowest for Denver dispensaries. Sales fall from December to January. Then they tend to slip again from January to February.

For instance, according to the most recent data, in December 2017, Denver reported $32 million in gross retail sales. In January 2018, the city reported sales had declined 9.4% to $29 million.

But similar to what we see statewide, sales pick up steam in March and chug higher until October.

Now, I can tell you almost every retail product has seasonality.

And cannabis is no different.

In fact, it’s showing a trend very similar to two others I follow – beer-drinking season and summer concert season.

And that’s logical if you think about it…

Colorado’s adult-use cannabis sales seem to align with that trend. And it’s a growing threat to beer consumption.

In fact, I was in Las Vegas this year during March Madness and St. Patrick’s Day. Nevada is another state that legalized recreational use last July… so the Vegas Strip was packed with partiers decked out in green of multiple varieties.

Nevada reported a record $41 million in recreational cannabis sales in March. It also had a very strong February of more than $35.4 million – the fourth best month since legalization. That can be directly attributed to the Super Bowl.

So we continue to expect weed to replace beer consumption during these types of events.

The other part of the equation for adult-use sales is summertime entertainment.

It’s concert season. And people head out en masse to have a good time.

We can look at a quarterly revenue chart for a company like Live Nation Entertainment (NYSE: LYV) and see the big bounces in revenue… 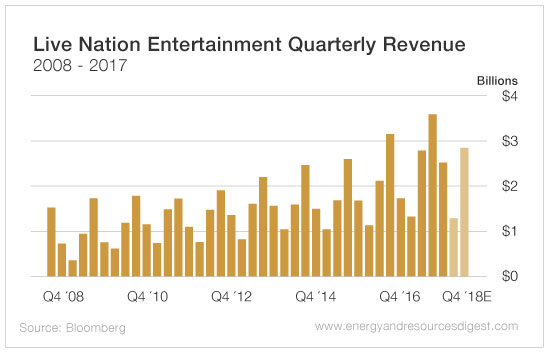 According to Bloomberg, the second and third quarters are the busiest for the concert company and Ticketmaster owner.

And we’ve already seen in the sales data that pre-rolled joints – which command a higher price – are big sellers during the summer months. That’s because consumers are too busy to roll their own and are willing to pay the premium for convenience.

It’s summertime, and consumers want to lay back and relax… They want to “live easy.”

But as recreational pot sales become more commonplace across the U.S. and the world, investors must understand that certain revenue trends will emerge.

We can use that to our advantage to know when an uptick is on the horizon, as well as to understand what’s happening when those sales seasonally fall off again.

Job Opportunities in Cannabis Are Growing